What is a Toyota Hybrid? | New Toyota Cars at Shelbourne Motors NI

WHAT IS A TOYOTA HYBRID?

In Northern Ireland - Hybrid cars are becoming more & more popular with hundreds of drivers making the change from petrol or diesel to Hybrid every week.

Two Hybrid models from a range of seven are featured in this video.

Hybrids are often confused with electric vehicles. Fully electric vehicles are entirely battery powered and require charging to travel. Hybrid vehicles use a standard engine and the electric bits are used to collect and recycle energy that normally goes to waste in standard cars. You don’t need to plug in a Toyota hybrid car, every time you use the brakes ‘regenerative braking’ turns the car’s energy back into electricity, which is saved in the batteries. 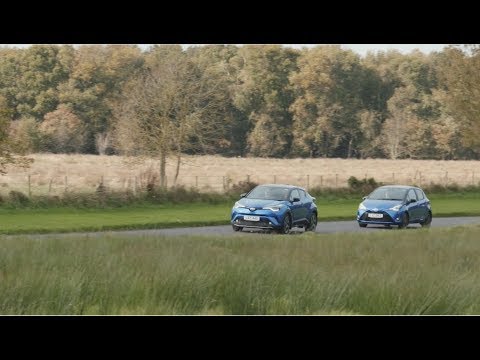 All of this electricity stored up while the car is driven as normal helps hybrids save fuel in two ways. The electric motor can kick in alongside the petrol engine to provide extra acceleration. Having this boost on tap means that the car can have a smaller, more economical engine, but the engine and motor can work together to provide the performance of a larger engine when it’s needed.​

The perfect partnership of an electric motor and a petrol engine means hybrid cars emit anything from 75g of CO2 per km, which is an amazingly low statistic for a family car. In fact, when driving in electric EV-mode, it can go from 0-50 km/h without producing any emissions whatsoever – you’d find more CO2 in a spent balloon.

Your hybrid saves money in more ways than one. The money you save on fuel is a given but what you might not realise is you’ll also qualify for free road tax too. It’s one of the reasons people choose to buy a hybrid in the first place.​

A feeling of Tranquillity

When you select the electric EV-mode on our hybrid cars you'll notice something quite special – nothing at all! The silence and sheer tranquillity of the engine really is something you have to experience to believe. Electric EV-mode also produces zero emissions and provides an ultra-smooth ride.​

Back
Book A Service
Vehicle Valuation
Compare Saved Vehicles
Top
Close
Your Cookie Settings
Select your cookie settings
Strictly Necessary Strictly Necessary cookies are essential to let you move around the website and use its features, such as accessing secure areas, shopping baskets and online billing. These cookies allow our website to provide services at your request.
Performance Performance cookies collect information about how you use our website e.g. which pages you visit most often, and if you experience any error messages. They also allow us to update our website to improve performance and tailor it to your preferences. These cookies do not collect any information that could identify you - all the information collected is anonymous. They will not be used to target adverts to you on other websites.
Functional Functionality cookies are used to remember the choices you make, e.g. your user name, log in details and language preferences. They also remember any customisations you make to the website to give you enhanced, more personal features.
Targeting Targeting cookies collect information about your browsing habits to deliver adverts which are more relevant to you and your interests. They also measure the effectiveness of advertising campaigns.
Save Settings
Cancel Changes

Your settings will take affect when you refresh the page or move to a new page. Find out more about cookies