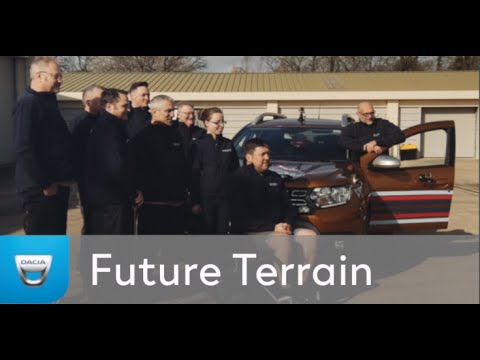 Dacia has announced it will be supporting Future Terrain, the career transition and rehabilitation charity, focusing on those with physical and mental injuries, that helps veterans secure civilian qualifications through participation in competitive and arduous motoring activities. The relationship will see Future Terrain operate four Dacia Dusters, supported by two Renault Master vans, provided by its sibling brand at Groupe Renault UK.

Through the partnership, the no-nonsense Dusters will be used for off-road racing, challenging expeditions and driver training which will help to deliver vocational qualifications for veterans. These qualifications will prove invaluable for ex-military service personnel as they transition to civilian employment.

As well as ongoing training for the veterans it supports, the partnership will see Future Terrain compete in the British National Cross Country Championship 2019 as well as in the Carta Rallye, an extreme 2,300 km rally event in Morocco taking place between the 31 st of March and 6th of April.

This month Future Terrain undertook a LANTRA 4x4 operators qualification course, learning the mechanics of the cars and how to correctly drive them off-road at MOD Bovington in Dorset, driving the Dusters through areas normally used by tanks and armoured vehicles

One of those to benefit from retraining support and rehabilitation for ex-service personnel is Director of Operations at Future Terrain, Grant White. White was serving in the Royal Marines when he lost his right leg in a motorcycle accident and is determined to use his experience of retraining and rehabilitation to the benefit of others.

Speaking on the upcoming work with Dacia, Grant said: “We’re thrilled to be entering into a long-term relationship with Dacia. “We have been putting the Dusters through their paces at Bovington and even in standard form on road tyres they have been really capable. The Dacia Duster is the ideal vehicle for our needs, proving robust, capable and extremely versatile. Future Terrain is dedicated to rehabilitation and career transition and our relationship with Dacia will make an invaluable difference to the lives of ex-military service personnel.”

Commenting on the new charity partnership, Ben Fletcher, Head of Dacia UK, said: “The partnership with Future Terrain is a natural fit for Dacia through its support of community and showcasing of ability, in both the people it supports and vehicles it uses. The charity’s enthusiasm, commitment and determination to succeed is self-evident and we look forward to supporting their program of training and rehabilitation. We’ve no doubt they’ll be testing the Duster to its limits and we can’t wait to follow their adventure.”

The All-New Duster is the UK’s most affordable 4X4. It carries over the same off-roading credentials that helped make the previous model such a success with a high ground clearance of 210mm, approach and departure angles of 30 and 33 degrees respectively as well as Hill Descent Control and Hill Start Assist. Also as standard on 4x4 versions is a 4x4 monitor that incorporates a compass and notifies the driver of the vehicle’s angle in real time.

For more on Future Terrain please visit www.futureterrain.co.uk or for information on the All-New Dacia Duster visit www.dacia.co.uk.

We’re proud to be affiliated with the following bodies